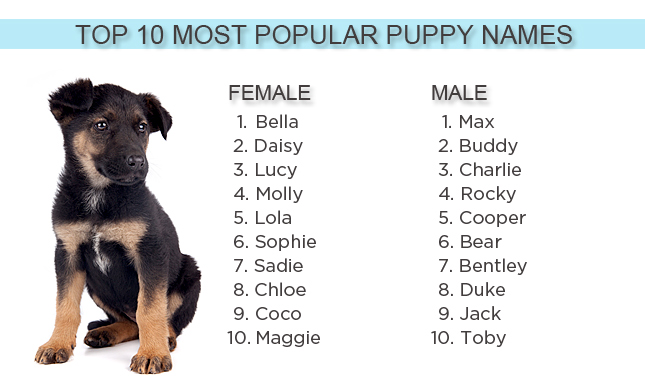 There are so many fun trends that influence the top 10 most popular dog names and it’s hard to determine what the top 10 actually are. But, here are the top categories and some of the most popular names in each category to get to you started if you’re stuck on finding the perfect name for your furry friend. Remember, depending on the area you live, certain names will be more popular than others.

Here are 10 of the most popular dog names and then read on to find out why:

In LA or New York, where fashion is big, brand names will often become dog names. However, if you live in the mountains nature names or human names may be more popular. By and large, dog names that end in an ‘ee’ sound are the most popular and one syllable or two syllable names are the norm. People like simple names that are easy to pronounce and just as people wear clothes that make a statement about who they are they also choose dog names that reflect their lifestyle and preferences.

If you don’t want your dog to have the same name as every other dog, it might be important to know that the top 2 dog names for male and female dogs are Max and Bella but of course this changes from year to year just as all name trends do. It’s interesting to see where people get their inspiration for naming their dogs and it says a lot about what people value in our culture. Bella has actually been the top name for a few years and is most likely attributed to the Twilight series. If you don’t want to have 5 dogs run towards you at the dog park when you call for your puppy, you may want to avoid some of these names.

Why is Max a popular dog name? Because it’s quite possibly the easiest name to say. It really doesn’t take much effort to come up with this dog name; it’s cute and it does the trick. Since when does everything have to have some deep meaning behind it, anyway? It’s like eating a hot dog — it doesn’t take much preparation or thought.

Dog name trends include celebrity names, technology related names, and court names that give dogs a kingly or queenly air. The choices people are making in naming their dogs are reflections of pop culture and technology culture. Dog names are starting to be more like human names, such as Charlie and Sophie but there also are some fun trends influenced by the technological era and social movements like the hipster movement.

With the growing trend of toy breeds many of these dogs are being named after large animals to poke fun at their small stature. For example, the name Bear is one of the most popular dog names. People like to have a sense of humor when naming their dogs and often they will choose another type of animal and call their dog by that animal name. It might be the furthest thing from what the dog is like or it might be more of what their personality is. Chihuahuas are known to think they are big dogs and often end up with a name of a much more aggressive animal.

Another trend is naming dogs after things found in nature like Daisy which is a very popular female dog name. Many people name dogs after their favorite thing which for some people might be a vacation destination or a type of wine. Disney names are also always on the top list. Interestingly enough, many of the stories from Disney are much older and come from folklore. The Disney stories are based on emotions that all humans can relate to such as loyalty, friendship, family tension, jealousy, and heroic gestures. People are essentially calling upon those stories and the feeling they have from them when they name their dog after a character. Perhaps subconsciously, it allows them to connect to that feeling every time they say their dog’s name.

Other trends include naming pets after brands or foods. People often choose a name for their dog that they have a positive association with. For instance, if they like reggae music they may name their dog Marley. Or, they may name their dog after their favorite Starbucks drink, like Mocha, or their secret dessert indulgence of Oreos or Snickers. We see a lot of popular dog names relating to people’s weaknesses that are often sugar related. You can probably think of a few of your own weaknesses that might make a cute dog name.

Some hipsters have started naming their dogs after their hobbies and healthy lifestyle habits like doing yoga or eating vegan. There are also some popular dog names trending for the progressive indie scene. This again shows that people like to choose names of things that keep them happy. It’s no surprise that dogs aren’t named Work or Corporation or Boardroom, right? Apparently, work is not a favorite pastime people are dying to relive with anymore mindless repetition than they already endure.

Finally, we see many dog names that are sports related — like a sports player or team. Names such as Jeter and Dodger are good examples. Sports names will vary greatly by region due to the respective fan bases. People associate their dogs as something that makes them happy and name choices are often derived from other sources of comfort in people’s lives. These little pets keep us young and smiling and their names reflect that emotion that they bring into our lives. More or less, the name you choose should make you smile and feel comfortable; it should roll off the tongue and you should try it out for a little while to make sure you don’t get annoyed with it.