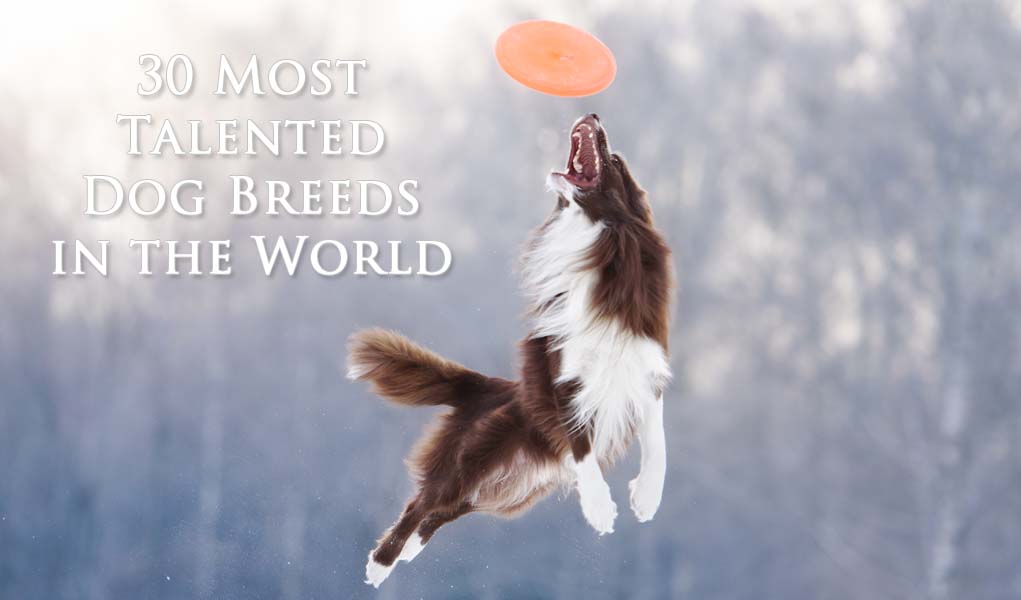 When you think of a dog, you tend to take notice of the furry friend who greets you at your door when you come from work. Many dog owners tend to believe that their pooch is the smartest and most talented dog around, which is natural. The fact of the matter is there are many dog breeds that are talented and smart; smarter and more talented than many others out there. The next time your friends or coworkers talk about how smart, agile, or how talented their dog is, take note to see if they make the list of smart and talented dog breeds. Listed below are 15 of the most talented dog breeds that owners should cherish.

The Top 15 of the Most Talented Dog Breeds

Many larger-sized dogs are not usually known for being talented, agile, or smart for that matter. However, this breed definitely makes the list of those that are talented to say the least. The Dutch Shepard dog breed is a highly agile and active breed, which bodes well for rescues and tricks that other dog breeds cannot learn. In addition to being an agile and talented dog breed, the Dutch Shepard dog breed is known for being a loyal and affectionate, thus making this breed a great family pet.

This dog breed has been known to wow and dazzle at dog shows around and for good reasons. The American Foxhound is a shorter breed and shows loyal and dedication to owners. This breed is not necessarily the most socialized and is actually known to be aggressive towards other breeds. The aggressive nature of this dog is nothing to worry about as it is still a talented dog breed and one of the best hunting breeds around. The head on this breed is typically dome shaped and the legs are built for strength.

Just as you guessed this breed originates from Russia and was once used as a military dog. This breed makes a highly talented breed for protection and intelligence because of its strict ability to sense many things due to its impeccable nervous system. This protective quality is a great adaptation that many families enjoy and its instincts make this dog one of the best for protection and defense. The dog breed typically has black curly hair and is about a medium sized, which is ideal as a family pet.

This is one of the oldest breeds that can hunt many differing scents and smells. The bloodhound breed is known for assisting police and other law enforcement personnel, making this breed a talented and necessary dog breed for the protection of many individuals. This breed is known for helping to solve many difficult police cases and it is an ideal breed for hunting game. These dogs are adorable and make a fine addition to any family dynamic.

This is a similar breed as far as its purpose and functionality to the bloodhound. The beagle is a great family dog with an impeccable nose for scents and smells, similar to the bloodhound. This dog breed is also used in many law enforcement cases and they have even been used to detect narcotics, certain agriculture, as well as many differing items at the Customs and Border Patrol. Beagles tend to have a howling bark and they make a great companion for any family.

This is a large breed dog that is one of the smartest dog breeds ever. The German Shepherd is a breed that serves in the U.S. active duty in the police force as well as in the military. The primary task, or job, is to smell out many different scents and smells to help assist police and military staff. This breed has the best nose around and can find even the smallest smells with no problem. In addition to making a great workforce breed, the German Shepherd is a common household pet that can serve as a protector and as a friend. They are large dogs and typically are pretty active and energetic.

They do not necessarily look the smartest or the most talented, but this breed has great potential when all things are considered. First off, pugs are a very small breed and are great with families, especially children. Second, pugs are a highly trainable dog breed, making the potential endless for these dogs. Lastly, the pug breed was once used as a military dog as part of their spot-on sense of tracking and smell. Never thought this breed was this talented? Consider this dog one of the smartest around the next time your coworkers brag about their pug at home.

When you consider a dog breed that is talented and smart, one must throw the poodle into the mix. This dog is the seventh most popular dog breed around and they tend to be very active, smart, and friendly dog breed. One reason this dog breed is considered to be talented and smart is due to its ability to excel in obedience and training. This breed is a perfect breed to welcome to the family and one of the most interesting facts about this breed is that it is always one color (there is never a partial colored poodle).

Dogs that are active and full of energy tend to be considered dumb and untrainable. The Weimaraner breed is hardly a dumb breed and is a highly talented breed, both physically and mentally. This dog is well socialized and is easily trained, making it one of the most talented mentally. Physically, this breed is better than most. They can guard, fetch, hunt, and point. In addition, teaching this breed tricks for the dog show is something that may seem easy due to its talents and skills.

Golden retrievers are a smart and active breed that is one of the most common in the household. They are highly adaptable to training and can make a great skills dog in shows. The golden retriever breed is best known for its socializing and for its hunting ability, thus giving this dog the skill as being a hunting friend and companion. These dogs can be a friend, pet, and in some cases, a seeing-eye or hearing dog for those who are disabled. They make some of the cutest puppies and they can play fetch for hours, hence why this breed is a staple in households all over.

This dog breed is notorious for being large and scary. However, the breed is actually friendly and skilled. They are highly talented because of their ability to guard and protect and for their ability to detect who is a threat and who is a friend. Many dogs can protect, but often times, breeds cannot differentiate who is good or bad. The Doberman may be the largest breeds you could come across, but they are one of the most loving and caring pets you could have.

This breed is actually considered to be the smartest dog breeds you can get, mainly because they are able to retain commands and training better than any other breed around. The primary function of this dog breed is for herding and is extremely fast at comprehending new commands. Some state that the Border collie is able to learn something new within five times (commands) or less. Yes, five times saying a command and this dog comprehends the meaning of this command. The Border collie makes a great household pet and may actually dazzle at any dog show you show the dog.

Many consider this dog breed to be dumb due to the energetic nature of the dog, but the truth is the boxer is a loving and talented dog. Known for their athletic ability, the boxer is highly capable dog breed for skills events and agility tricks. The boxer is capable of learning new commands with proper training and it makes a great household pet. This breed needs to burn off a lot of energy on a daily basis and it takes a patient owner to stand by commands and rules in order to help this dog breed around.

This is by far the most popular and common dog breed around and the reason is due to the talent, skills, intelligence, and socialization the breed is known to have. This dog is usually considered to be on the bigger side of dog breeds and it is designed with powerful jaws and eyes that can sink your heart when they look right at you. Training this breed is super easy and they tend to pick up on cues and commands quickly.

This dog breed is a common household pet and they are a talented dog breed. This breed is known to be easily trained and with the right trainer, the Jack Russell Terrier makes an ideal fit for skills competitions and obstacles. While many dog breeds that are athletic get labeled as being smart, this breed defies this logic and demonstrates that talent and skills can go with brains.