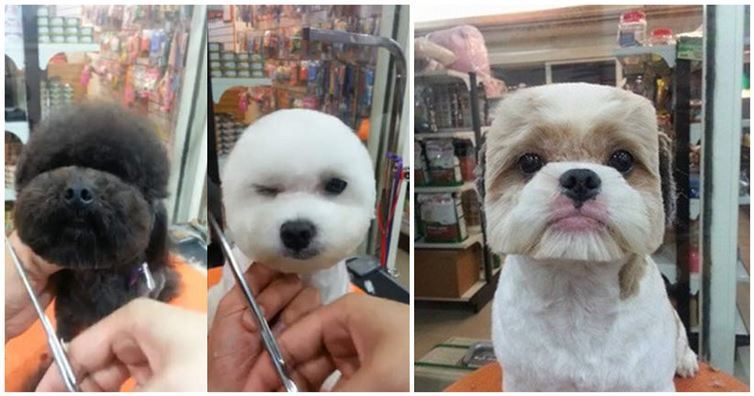 Until recently, the most extreme examples of dog grooming were the topiary-like cuts given to Poodles. These cuts are said to have been started centuries ago to help the dog retrieve waterfowl from lakes and rivers–the heavier hair on the chest would protect against the cold water while the back legs would be afforded more mobility from having the fur closely cut.

It’s true that many people disparaged the cuts that evolved from these hunting styles and poodles have since gained a reputation as being the weak sisters of the dog world as a result of the tonsorial styles imposed by fashion and their owners. This is a shame because Poodles are actually excellent and tough hunting dogs rather than simply dogs to exhibit in a show with a fancy hairdo.

However, some of the recent grooming trends make the tradition Poodle cuts look conservative. And it’s not only Poodles that are subject to these whimsical tonsorial flights, other breeds are now in on the “fun.” Competitions for the most colorful and/or outrageous grooming adventures have really produced a fad for these crazy kinds of hair treatments called creative Poodle grooming. Like all fads, many of these will undoubtedly be only a fond memory in the near future, so enjoy the wackiness while it lasts.

This will work only with dogs that have plentiful and frizzy hair, such as Poodles. To form this style, the hair is clipped to form a perfect cubic shape around the head. Some stylists and dog owners go even further and clip the chest, leg, and tail hair into these squared-off shapes. This definitely takes the usual Poodle cut to extremes.

Another geometric style, like the cube head, is one that makes the hair on the dog’s head spherical. The object is to make the dog’s head look like a ball or melon. Besides Poodles, Bichon Frise are probably a good choice for this grooming adventure. Sometimes the ears are included in the sphere and sometimes they form accessory blobs alongside.

While most people dye their hair to cover the gray as they age, they seem to remove all holds when getting dye jobs for their dogs. Wild colors, either in an abstract pattern or showing flowers, birds, or even street scenes are placed on the dog for a startling and unexpected sight. It might actually be a good thing that dogs are unable to see as many colors as humans are.

In addition to the geometric trim such as the cube and sphere that are temporarily popular, extreme topiary clips are also available for dogs. These are sometimes combined with dye to create pictures on the dog such as a monkey with bananas and palm trees or a dog with a 3D flower garden growing on its back with its head crowned by an enormous poof of hair. Dogs such as Bedlington Terriers can have their hair shaped in such a way as to make a fairly credible camel or even a buffalo. As long as there is enough hair with body to work with, the owner’s imagination (and wallet) is the only limit.

We all know that some species of dog have been compared to lions, but now you can actually turn your dog into another species entirely. Like tigers? Well, for a price, your dog can be dyed orange and have the appropriate black stripes applied. There are infinite possibilities, like panda dogs, a dog wearing a turtle on its head, or perhaps you fancy a fantasy creature complete with dragon spikes around the head and claws sprouting from the legs.

The fad for actually tattooing pets has met with nearly universal disapproval. The dog has to be put under total anesthesia while the tattoo is applied and often several sessions were required for the desired result. Every dog lover should know that putting your dog under anesthesia always presents a risk to the dog and in many places this practice has been banned. However, there really is nothing dangerous or illegal about putting a temporary tattoo on your pet. These are applied like paint, often in glittery colors, and will last several weeks. Obviously, this is a much safer and more humane way to “tattoo” your dog. The “tattoo artist” generally uses a stencil to produce a sharp and attractive design.

Probably one of the more innocuous of the stylistic fads for dog decoration, nail polish for dogs has expanded beyond the ordinary color range to match some of the more involved polish treatments available for women. You can have your dog’s nail polish match your own or indulge in patterned or glittery polish. Many polishes are available in over 20 colors including greens, blues, and purples. If you are considering nail polish for your dog, make sure that it’s one designed for dogs and is dog safe (dogs lick and chew their paws and nails).

Decoration on your dog doesn’t have to involve dye jobs or temporary tattoos, there is another way to make a fashion statement with your dog’s coat–by shaving a design into the hair. Humans have been using this for years to decorate their heads and now the practice has spread to dogs. You don’t need a dog with long, frizzy hair for this to work, either–short-haired dogs can have a pattern cut into their coat just as easily. Paw prints and hearts appear to be the most popular choices.

It was probably inevitable that punk hairstyles for humans would eventually overflow to dogs. These styles, of course, work best with dogs that have longer hair, but in this case, frizzy Poodle-like hair is not a prerequisite. Almost any dog with enough hair on its head can have a spiky punk hairdo. The hair can be left in a natural color or you can go whole hog and use a rainbow of colors for an attention grabbing pup. A Mohawk haircut doesn’t have to be confined to the head, either. If you’re going to do the head, why not extend the Mohawk right down the backbone to the tail? However, leave the piercing out of the picture–it’s okay and fun to style your dog’s hair, but puncturing it for no reason is wrong. Leave the studs and earrings to those who can choose to have them or not.

Many accessories that people put onto their dogs are functional. Those who live in cold climates often provide sweaters, coats, hats, and even boots for their dogs. However, it’s also possible to use accessories that simply add a bit of strangeness to the everyday world. If you’ve modeled your dog to look like a horse, it just makes sense to add a saddle. Those who are embarrassed by the appearance of their dog’s butt while out in public can use a flower sticker in the appropriate place. For dogs who have a tendency to wander, you might want to use a GPS collar that will allow you to track down the miscreant, hopefully before it gets into too much trouble.