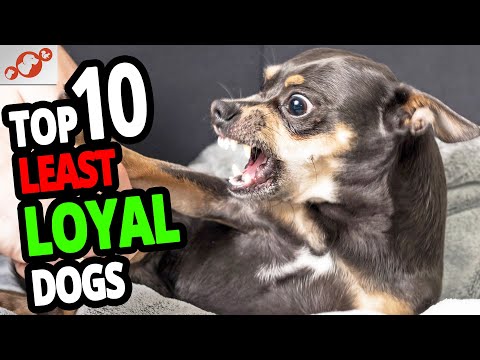 Yes dogs are man’s best friend but some friends want their space. These breeds are known to be less attached to their owners due to their breeding and use historically. Some of these breeds are known to be more aggressive towards animals and some are just stubborn or independent like cats. You’ll be interested to know that personalities run deep in dog breeds and of course can be influenced by the owner’s training, attitude and the environment they are raised in. Here are some breeds that are known to be more independent than cuddly and if that’s more what you’re looking for, one of these might be a great addition to your family.

This hunting dog looks very similar to the beagle and is often confused for one. They are hunting dogs and can be quite stubborn. They will alert you to strangers but they don’t make the best guard dogs when you’re not around. They are just too stinking friendly. Most hunting dogs tend to be very independent and this is why the harrier has made it onto the least loyal dog breed list.

This dog breed needs socialization and training from a young age. They were bred to hunt wolves and can be aggressive towards their owners, family and strangers if someone in the home does not establish the alpha role. They shed a lot and have a lion like mane. They are known by their fluffy coat and black and purple spotted tongue. If you don’t have time to train a dog, this is not the breed for you!

This silly looking dog can develop small dog syndrome and try to control other dogs. This can get them into trouble with bigger dogs and they are also prone to developing separation anxiety. The owner must be strong minded or he will become very stubborn and unruly. They do however make good watchdogs and they are great at hunting rodents as most terriers are. This is a small breed, usually no heavier than twenty pounds and not taller than a foot off the ground.

This dog can reach up to 7 feet tall when it stands on it’s back legs. They don’t do well with too much exercise when they are young but when they grow up, they should not be cramped in a small apartment. They are large dogs usually 90-150 pounds. The reason this dog made it on the unloyal list is because it’s a sighthound so they chase things and may not be stopped when you call them. This can be dangerous if you live near busy streets. It’s important to keep this dog on a leash and have your yard fenced in. Otherwise, they are a loyal breed, besides the running away.

This breed is related to the chow chow and they are a dominant breed. They have short hair and wrinkled skin that is distinct from other breeds. Just like the chow chow, they will dominate if their owner doesn’t have a strong mind. The owner should be calm and firm as well as consistent. The owner will have to establish the alpha role or the dog can become unruly. While this breed does tend to drool, they are easier than other breeds to housebreak. They are also not a fan of water compared to other breeds like retrievers.

This breed has about six different names including the Lebrel Afgano, Levrier Afghan, Tazi, Sage Baluchi, Baluchi Hound and Afghanischer Windhound. This breed made it on the least loyal list because they can be somewhat aloof. They may not be the biggest cuddlers in the world. They are suspicious of strangers but not aggressive. They have a noble and elegant personality that matches their long coat and slender tall body.

These notorious chewing dogs are on the least loyal list because they are intelligent and know when they can manipulate their owner. They need someone who is calm, consistent, yet firm. They are very intelligent and need a lot of exercise. As their name implies, they love the water. They tend to be 35-55 pounds and no more than 22 inches tall. As with most breeds, the females are a bit smaller than males.

Also known as the Bohemian Terrier, this is one of the most interesting looking dog breeds. Their short legs, long beard and eyebrows give them a very distinct look compared to other dogs. Their hair drags on the floor like a shag carpet and their silky hair needs some maintenance. Because of their small size and terrier traits, they must be socialized. Otherwise they can be fearless with big dogs and think they are the leader of the pack. If not properly trained and socialized, they may become feisty and even stubborn.

This little dog was originally used to take care of the rats and foxes. As with most terriers, they can be feisty and get small dog syndrome if they aren’t given a dominant authority figure. They are exceptionally small, only weighing in at about 10-12 pounds and not taller than a mere ten inches. You’ll have to give them rules to follow and not leave them alone for long periods of time unless you want them digging and barking!

Also known as the podenco ibicenco, this breed has been known to kill cats it doesn’t know! They don’t respond well to negative or harsh tones of voice but need a firm owner. They will need careful introduction to adult dogs and slow introduction to babies or children. They have short hair and are very low maintenance when it comes to grooming. They are fairly independent but as pack dogs, they can’t be left out of the family.

Now you have an idea of which dogs aren’t going to cuddle up with your under the covers to watch your favorite sit com. If you don’t want to be bothered too much by your dog, then you might do well with one of these breeds. As always, we want to remind you that taking on the responsibility of a dog should not be a quick decision as it takes a huge commitment. That being said they can teach us many things and even discipline us in many ways.