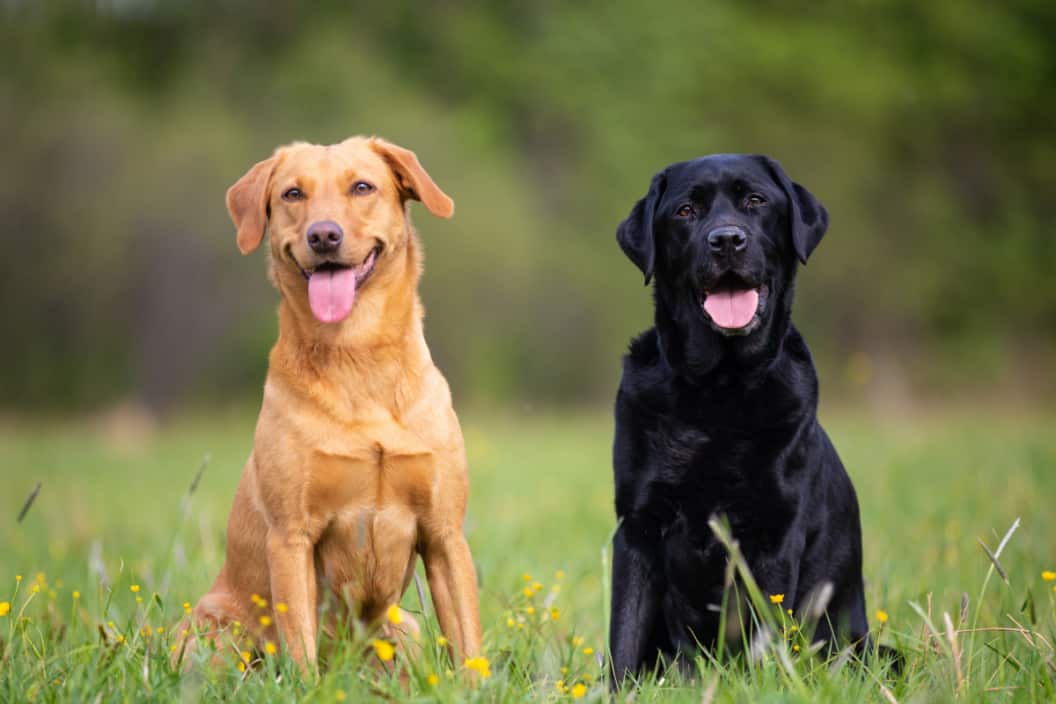 The fact that Labrador Retrievers are the favorite dog breed in America and so many other countries should come as no surprise to anyone who has known one of these dogs. Performing well not only as a gun dog, but also as a cherished family companion, the Lab might be said to be the perfect ‘all around’ dog. The disposition of Labs is nearly universally friendly and gentle, and when you combine this with the loyalty these dogs exhibit towards their human pack, you have a dog that can be an asset to nearly any household. Labs are renowned for their patient attitude towards children.Labrador Retrievers developed from the St. John’s Water Dog, originating in Newfoundland, the Canadian island just off the Labrador Peninsula. The St. John’s Water Dog was used by the region’s fishermen to bring back nets and capture fish that may have escaped from the nets during fishing expeditions. These dogs were introduced into England at the beginning of the 19th Century, and their blood was mixed with that of Spaniels, Setters, and other retrieving dogs to result in the dog that we know today as the Labrador Retriever. Labs still love the water and bringing things back to you, whether it’s a Frisbee or a duck.Labs are medium-large dogs with coats that come mostly in yellow, chocolate, or black. There is now a newer coat color for Labradors called silver. The coat of these dogs is greyish and they have yellow or grey, rather than brown, eyes. Regardless of coat color however, all Labs have a double coat – there is hard outer coat that repels water and a soft, downy undercoat for warmth.

There Is More To Labrador Retrievers Than Meets The Eye
If you are considering adding a Labrador it’s always best to find out all you can about them prior to purchase or adoption. The more you understand about the needs of your potential companion, the more likely it is that the association will be successful.

Male dogs can weigh up to 80 pounds and females up to 70, and a fit dog will be mostly muscle. Because these dogs are so powerful, it’s important that you train them from puppyhood to obey you. Companion dogs will require basic obedience training and socialization, while hunting dogs will need to learn commands associated with the field. It’s much easier to handle and train a puppy than it is with a fully adult dog.

2. The exercise needs of Labs should not be underestimated.

These dogs began as working dogs and the need for physical exertion is present in all of them. Owners should always devote at least one hour per day to exercising their dog. Hunting dogs will often get enough exercise while training or in the field during hunting season, but companion dogs will need to get out and get moving. A long walk or running alongside a bicycle is sufficient. Labs that do not get enough exercise are apt to become destructive in the home.

3. While Labrador Retrievers do require exercise, they can also be lazy when not actively working out in some way.

When combined with the love these dogs have for food, it’s all too easy for Labs to become obese, which can lead to numerous health problems. If you can’t feel your Lab’s ribs at all, it’s probably time for a diet and more exercise.

4. Labs may be used mostly for hunting and/or companionship

Because of their good natures and high level of trainability, they also make excellent service dogs for disabled people. Law enforcement uses Labrador Retrievers to detect contraband or explosives, as well. Because of their exceptional sense of smell, Labs were used during the Vietnam War to sniff out not only wounded American soldiers, but also hidden enemies.

5. There are actually two kinds of Labrador Retriever: the English and the American.

Both types exhibit the similar personality traits and eagerness for the field, but there are some differences between them. The English Lab is a stockier, more rough-sand-ready looking dog, while the American Lab tends to have longer legs and a more agile appearance. The English Labrador Retriever is more relaxed in outlook than its American cousin.

6. One of the more serious health conditions that can affect Labs is exercise-induced collapse, or EIC. This is a serious problem, often seen in young, otherwise strong and fit animals. After a short, but demanding exercise period, the dog will become weak, overheated, and will simply collapse. EIC is usually seen in dogs that will be used for field work. A Lab that has this condition cannot be used for hunting or field trials, but will still make a very good household pet, and will be able to benefit for light exercise.

7. In addition to EIC, Labs can also suffer from several other medical problems.

The most serious is probably gastric torsion, where the stomach twists around, shutting off the ability for anything to enter or exit it. Veterinary care is needed immediately. And, as with most large dog breeds, hip dysplasia can be a problem. Many responsible breeders are doing their best to only breed dogs that have no predisposition to this, so make sure that you do purchase your lab from someone reliable.

8. People who are looking for a guard dog, should not be looking at a Lab.

A guard dog is one that will actively come to your defense, but also have the ability to tell the difference between a friendly stranger and one that might mean harm. However, although Labs are not guard dogs, they are good watch dogs and will alert you with barking should someone approach your home.

9. Some Labs are bred for the show ring, others for field work, and still others for companions.

While all of these dogs will be good family pets, keep in mind that field dogs will definitely want a good deal of exercise and show dogs might be a bit more highly strung as they have been bred primarily for appearance.

10. Like most hunting dogs, Labs and their ancestors have developed by interacting with human beings.

Labrador Retrievers need human interaction and attention to thrive. These are not dogs that should be confined to a kennel – they should be in the home with the family. Labs deprived of human companionship can suffer from mental problems.
Welcoming a Labrador Retriever into your life can be one of the most rewarding of experiences for you and your new friend. Taking the time to find out whether this is the breed for you, and being willing to devote yourself, to a great extent, to this dog can give you a faithful, loyal, and loving companion.