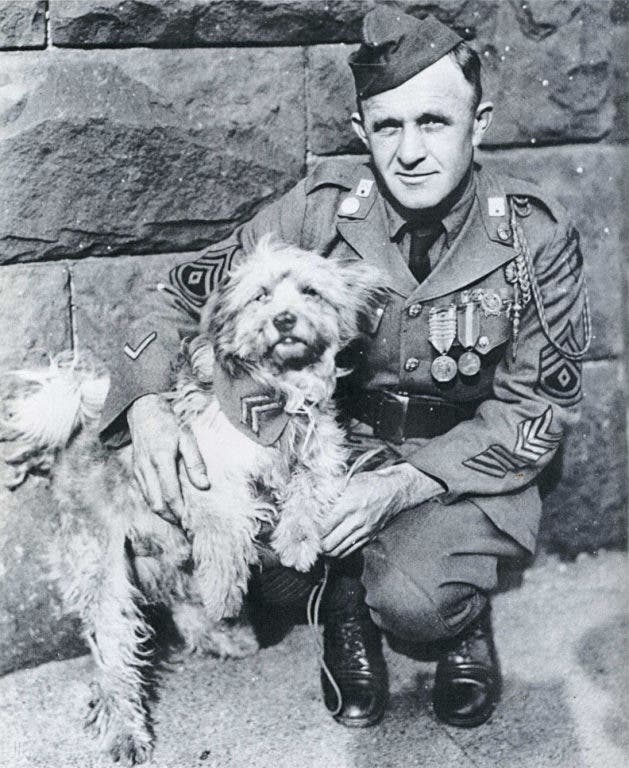 Although it seems impossible to imagine, there have been a great deal of dogs who’ve been a part of war. Some of these dogs weren’t trained for military service at all but still exhibited strengths like courage, loyalty, and keen hearing and scent. The eight famous war dogs below mostly fell into their positions as part of military action, so the honors that they received were both prestigious and well-deserved. Here are eight dogs who endured battle and helped save many lives during their time in the service.

Nemo was a loyal German Shepherd that served in the Vietnam War alongside his master. It happens that Nemo and his master were ambushed while in the Jungle, and hit pretty severely by a hail of gunfire. In fact, Nemo’s was one of the first legitimate cases of a dog being retired from the service and fully permitted to leave the battlefield to return to the US. This dedicated dog was hit in the face and lost his eye, but refused to abandon his master who had also been shot. The dog literally threw himself over his master and protected him while he called in an airstrike and was rendered unconscious. Upon being discovered, Nemo refused to get off of his master and had to be removed by a vet.

This impressive Newfoundland dog was taken by the Canadian Military in order to save him from being euthanized over a slight misunderstanding. Gander served as a mascot for a rifle brigade during the battle over Hong Kong, which occurred in 1941 and took many lives. Gander was particularly useful due to his size and excellent hearing abilities. His crowning moment came when he was sleeping outside of the camping quarters of his unit and became aware of an enemy presence. Gander attacked a first group of Japanese men who were trying to attack his unit while they slept and demolished a second that was about to execute a group of wounded rifleman. A grenade was launched, and it landed in the middle of the wounded. Gander selflessly saved the brigade by picking the grenade up and running it back to the Japanese. Unfortunately the grenade did detonate, taking Gander with it. To this day, Gander’s name is the only one belonging to a dog on display as part of the Hong Kong War Memorial in Ottawa.

Rags fell into his position as a war mascot by accident when an AWOL American soldier was discovered to be hiding in France during WWI (1917). The soldier found the terrier on the streets and made up a story about how he was trying to track down the pooch for his division. As such, the dog was put in place as a mascot but served the important purpose of delivering messages to other units where a human could not. He was taken out of service after being blinded by gas and surviving a bomb attack while running an important message to another regimen. Luckily, he survived and was adopted by a family in the US.

Smoky was a Yorkie that was discovered hiding in a hole in the jungles of New Guinea in 1944. The dog was taken in by a soldier who shared everything with the toy-sized dog, including meals and fluids. Smoky had amazing hearing and was able to warn her master and his division of many impending shell and gas attacks. This pint-size terrier wasn’t actually allowed to be there, but was a highly devoted animal to the degree that her master had to sneak her home to keep her. In the end, Smoky became an excellent therapy dog who was taught tricks and frequently comforted injured soldiers and vets until her death in 1957.

Rip was a Terrier and untrained Search and Rescue dog that was discovered after an air raid in London during WWII. This tiny dog was nursed back to health and turned into an Air Raid Patrol mascot. Due to his tenacity and excellent tracking skills, Rip helped locate and save over 100 people who had been buried or trapped under rubble from additional air raids. In fact, if it wasn’t for Rip, the British Military would have been delayed in their decision to begin training other dogs to track down survivors of attacks, which is a practice that continues to this day in Search and Rescue.

Lex is a German Shepherd and probably the most recent of famous war dogs due to his service alongside his master, Corporal Dustin Lee, in Iraq during the first decade of the Millennium. Sadly, Lex witnessed the violent death of his master and, like Nemo in the First World War, needed to be pried from his owner’s body in order for medics to attend to his injuries. Lex was given an early honorable discharge from the US Marines in 2007 due to his faithfulness and was seen comforting his master’s family during Corporal Lee’s memorial.

Born in China and adopted by the British Navy in or around 1937, Judy was a Pointer whose ship was wrecked due to torpedo fire. She somehow survived and saved her whole brigade by locating a water source for the whole group. Unfortunately, the group was captured while trying to reach a safe zone and all were taken in as POWs. Judy was hidden and brought into the camp, but was left to starve due to the lack of food. One soldier took pity on her and began to divide his rations up between himself and the dog. The two ere transferred to a new camp, and their ship sank again. Judy was said to have helped soldiers find wreckage remnants to hold onto until they could reach shore, saving men once again. She was reunited with her owner at the new prison camp, and the two were liberated in 1945.

Awarded the canine equivalent of the Victoria Cross, Khan was a German Shepherd that was immediately paired with a Scottish Rifleman for the British Military during WWII and sent to storm a beach for strategic gains in the war. Their boat was obliterated, and Khan managed to make it to shore unscathed. When he realized that his master had not made it, Khan swam back out into the water while under fire and in the dark to find his master 200 yards from shore. The brave German Shepherd then helped guide his Rifleman, who couldn’t swim, back to shore, dragging him out of the water before collapsing. Khan did survive the war and was later reunited with his handler during a parade honoring war dogs.