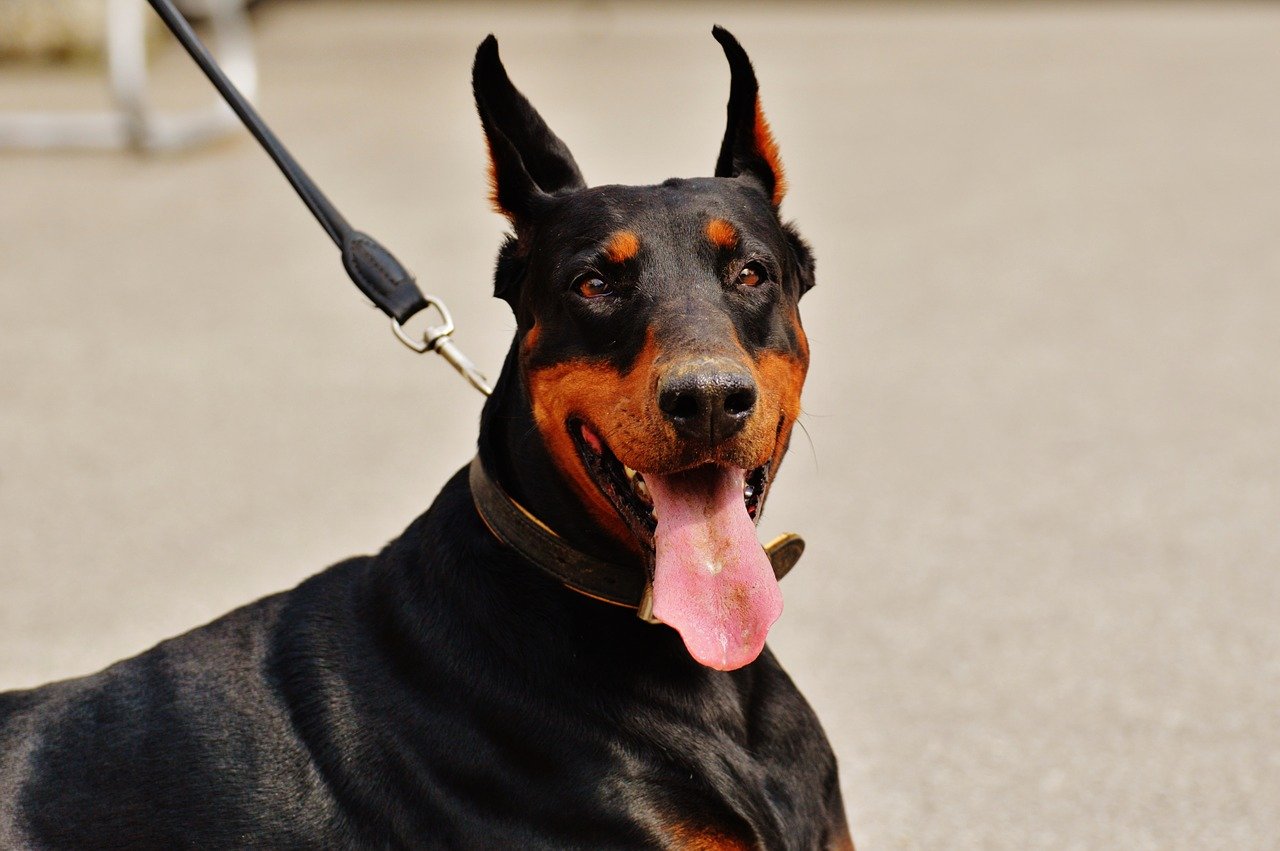 One of the most elegant-looking, but perhaps one of the more challenging of dog breeds, the Doberman Pinscher can make the ideal pet for the right person and circumstances. Over thousands of years, dog breeds have evolved to possess certain qualities – some dogs are strictly companions, some are hunting dogs, and some are very good at guarding and protection. The Doberman falls into the last category.

The Doberman, or Dobe or Dobie, is a ‘young’ breed of dog, having been developed in the middle of the 19th Century by tax collector Karl Louis Dobermann. Travel at that time was restricted to going on foot or going on horseback, and some of the areas Dobermann went through as he collected money were subject to attack by highwaymen. Dobermann needed a strong, alert, and obedient guard dog to protect him, and set about developing a new breed of dog. By combining various shepherding dogs with a dash of Greyhound, Terrier, and Rottweiler, he ended up with the dog we know today as the Doberman.

Dobermans are medium-large, muscular dogs with very fast reflexes. They are also highly trainable, which has proven important in their work with the military, police, and in home protection. Dobes are also used as search and rescue dogs thanks to their finely honed senses.

Do Your Homework Before Getting A Doberman
Getting any breed of dog requires a commitment. Hopefully, you and the dog will be able to spend years together as a team. Dobermans are great dogs, and are easy to train, but they are also dogs that may present some difficulties if not with the right owner. If you are considering adding a Doberman to your home, be sure that you and the dog, and your household, are a good fit. Dobermans probably are not a good dog for first-time dog owners.

They are alert, fast, and agile. Since Dobermans do bond strongly with their owners, they will have no problem providing defense to the home. Dobermans don’t have to be taught how to defend and guard, it’s instinctive with them.

2. Aggression does not necessarily mean that your Doberman is a good guard dog.

An overly aggressive dog is like a big firecracker waiting to go off without warning. A dog who snarls at everyone who comes to the door or tries to attack people and dogs on the street is not a good guard dog. A good guard dog is intelligent enough to obey your commands, rather than just flying at everyone and everything, but will also take immediate action if danger actually threatens.

3. Because Dobermans score so high in intelligence, they are actually very easy to train.

Your Dobie will want to please you and will respond best to consistent, patient, and positive training. Puppy obedience classes are a great way to start, and will also help to socialize your Doberman to other people and dogs. Never hit your dog. It will only make the dog fearful and more likely to react aggressively at the wrong time.

Although your dog may look like he or she is full grown at 10 months, the maturation process, both sexual and social, will not be complete until the dog is about 2 years old. It’s a mistake to expect too much out of your Doberman until the dog is actually an adult, both physically and mentally.

5. The lifespan of Dobermans is not as long as most owners would like.

Dobermans usually live only 10 to 12 years, with a significant number of them dying by the time they are 7. The reason for this is that these dogs are subject to a number of serious diseases. Many Dobermans develop an enlarged heart, which can result in an early heart attack, sometimes even in very young dogs. Another problem is von Willebrand disease, which is a form of hemophilia – the dog can bleed uncontrollably from a cut or during surgery. Wobbler’s syndrome affects the vertebrae in the neck of a Dobe, with the symptoms ranging from slight unsteadiness to total paralysis.

6. The Doberman is a dog that needs a lot of exercise every day, without fail.

Although this breed adapts well to even apartment living, a turn or two around the block is not going to satisfy a Doberman’s need for exercise. These dogs have an enormous amount of stamina and need to burn off that inborn energy with some real exercise or work every day. A dog that doesn’t get the needed exercise can start barking uncontrollably or start ripping up furniture in the home just out of boredom.

7. Controversy over tail docking and ear cropping for Dobermans has reached something of a fever pitch over the past decade or so.

This is now banned in most European countries, but still allowed in the United States. While there are some problems with these procedures, generally they do little harm. Although they may do little good, other than making the animal look a certain way, they do maintain the ‘look’ associated with the Doberman breed. The decision is best left up to the owner.

8. Despite being viewed as a ‘tough’ breed of dog, Dobermans are actually very emotionally sensitive.

Any stress in the home, illness or arguments, will affect these dogs profoundly. Not only will the dog become nervous and jittery, but the physical health of the Dobe can be affected with an upset stomach or diarrhea resulting. This emotional sensitivity actually has a very good result when Dobermans are used in therapy work – they understand the needs of ill or disabled people instinctively and respond with kindness.

9. Problems with Dobermans often arise not only because the humans have not shown themselves to be pack leaders, but also because a normal household schedule is not followed.

Dogs are creatures of habit, and a regular schedule helps them to feel secure and know their place in the world. Getting your new Dobie pup on a schedule of feeding, outside visits, exercise and play can help keep behavioral problems from beginning in the first place.

Although the Doberman is often looked upon either as being the epitome of everything a dog should be or everything a dog shouldn’t be, the fact is that a great deal of how your Doberman turns out will depend upon the care and guidance you provide. Dobermans who are raised with a firm, but kind and consistent hand will usually turn out to be a valued and loved member of the family, who also serves as a protector and guardian.